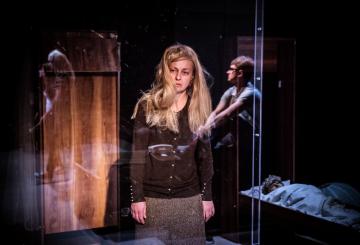 In the early morning hours of  February 22nd 2005 the famous painter, Zdzisław Beksiński, was murdered in his apartment. Several punctured wounds have been found on the body of the victim. Until today, many close relatives of the artist remember that cold, laconic piece of news in the radio. That has been the end  and the beginning of the history of the Beksinski family.

The recollections of two introverted eccentrics and an eccentric women attempting to provide them with safe haven, show the mechanisms governing the memory. The simultaneous narrations about these characters create colorful, yet alternative scenarios. At times, they are contradictory or full of over-interpretation. However, it is obvious that the memory never dies. The story may seem incomplete, fragmented, superfluous or based on untrue events, yet it is impossible to remain indifferent to the history of the Beksiński family.

Beksinski is a play which, in a non-linear manner, presents the story about loneliness and inability to express one’s feelings, but also about love, which is the source of acceptance and understanding in the face most irrational behaviors and attitudes. It is a story about art that consists not only in exploring one’s own subconsciousness, but also in escaping from oneself.