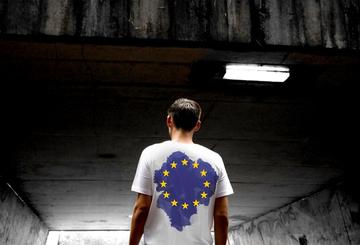 We, Europe, or the Feast of the People

What Europe do we want? And what do we want to be within Europe? A Europe where everyone would have their place? A Europe which no longer weighs on us with decisions we can't control?

Laurent Gaudé answers those questions with a powerful poem. More an outlook than an answer, actually. Orchestrating live, composer and director Roland Auzet has actors from different nationalities meet with a choir made up of people of all ages to create a “We.” We, Europe. They embody the poem, which becomes faces and words. As we listen, it carries us off in its currents. Tragedy and hope can both be heard in it; the singing turns into a scansion of desires and images, which all together redefines the possibility of a collective history. We, Europe, or the Feast of the Peoples is a polyphonic show, which turns the audience into an assembly of poet-citizens, the actors of an impending change. A mosaic of languages for a diverse Europe where art strengthens the political, in the hope that the latter will finally start taking everyone's existence into account.

Roland Auzet is a composer and director for the theatre and opera. He likes to turn the space of the stage into a place of perceptions where sound and words explore a shared emotion. In addition to bringing his multidisciplinary approach to many cultural institutions throughout the world (Europe, Asia, North America), he also spends a lot of time teaching, as well as directing, programming, and producing musical and dramatic projects.

In plays like Onysos le furieux (1997) [Furious Onysos] and novels like The Scortas' Sun (Prix Goncourt 2004) and Salina (2018), Laurent Gaudé explores a world in which the legacy of myths and the weight of fate often cross paths. The title of his latest poetry collection, De sang et de lumière (2017) [Of Blood and Light], reminds us of what is at the heart of his generous body of work.

Nous, l'Europe by Laurent Gaudé is published by Actes Sud.