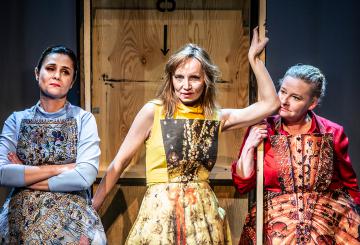 The point of departure for reflections of the three drama actresses invited to the project: Dorota Landowska, Małgorzata Trofimiuk and Małgorzata Witkowska, is the so-called confession of Halina Mikołajska - a text from a private archive, in which this outstanding post-war actress, a true lady of the Polish stage, heroine, but also a politician, social activist and member of the Workers’ Defence Committee KOR, during post-surgery convalescence, confronts the challenges, expectations, dreams and disappointments that accompany an actress’s relationship with her audience. The main protagonists of this meeting are the actress and the audience - it is the audience members who become confidants of bold statements about theatrical hierarchy, games that exalt some at the expense of others, economic injustices, or the dependence of the theatre institution on state power and the conditions dictated by it. Carefully kept secrets are revealed from behind closed doors of directors’ offices and actresses’ dressing rooms, and the actresses’ words become a manifesto on the way to a more justly arranged theatre.

An important aspect of this statement are private opinions of contemporary actresses woven into Mikołajska’s text. Thanks to this, a moving dialogue takes place on stage, in which theatrical contemporaneity, which is not devoid of critical reflection, is surprisingly mirrored in history, leading to unexpected conclusions.