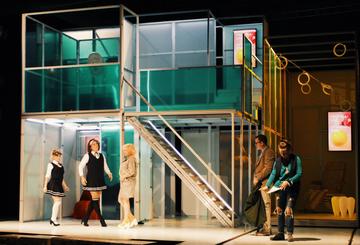 Cinderella's ticking clock tells her to think about her dead mother. If she stops doing so, even for a moment, her mother will definitely go away.

So she looks at her clock, sets the alarm and thinks. In the background, you can hear the excited stepmother who tells her daughters about her visit to the store, where her figure, beauty and grace have once again been appreciated. Apparently it starts boring her. Cinderella’s father is sitting in her room - an old widower, who decided to find happiness again in the stepmother’s modern house made of glass. Now, he is lighting another cigarette, gazing absentmindedly at the wall. You can hear a crack, but it’s nothing. Just some birds crashing against the walls of the glass house.

The French playwright rewrote the world-renowned fairy tale, making it a brilliant story about maturing, reconciling with loss and fighting for self-esteem. Cinderella, in order to be happy, no longer has to marry the prince. She will not live in the palace, though most likely she will live happily ever after. However, before this happens, she must come to terms with the death of her mother. Pommerat moves in an uncompromising manner on unchartered territories, entering into an honest and open discourse with young people. Topics such as death or mourning are still taboos, and taking about them must involve crossing certain limits.

The play, directed by Łukasz Gajdzis, is a brilliant family story about growing up and entering into relationships, about the meaning of dialogue and the will to remain silent, and finally about the perception of yourself through the prism of your own experiences that never cease to surprise. 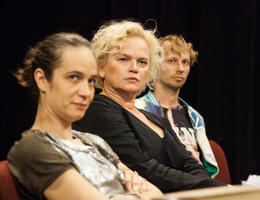 Cinderella's ticking clock tells her to think about her dead mother. If she stops doing so, even for a moment, her mother will definitely go away.