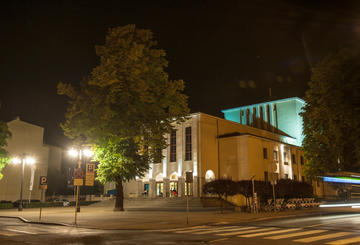 celebration of the World Theatre Day

World Theatre Day was initiated in 1961 by the International Theatre Institute (ITI) to commemorate the inauguration of the Theatre of Nations in Paris in 1957 - the festival where casts from both sides of the Iron Curtain met.

To celebrate the World Theatre Day in the Hieronim Konieczka Polish Theatre in Bydgoszcz we have prepared the play Maria Antonina. The trace of the Queen directed by Wojciech Farugawhich will be staged on March 23th. We have also prepared an event accompanying the play, i.e. the Gala, during which the Mayor of the City of Bydgoszcz, Rafał Bruski, will award the actors and employees of the Theatre. During the Gala, The Director of the Theatre, Łukasz Gajdzis, will also deliver his keynote address.

We want to celebrate this special day with you, meeting after the play over a glass of champagne. As part of this special holiday, a fireworks display is also planned to illuminate the square in front of the Theatre. The presence of audience, artists and the crew of the Polish Theatre will be a great opportunity to talk about the place that we have been creating for many years now.