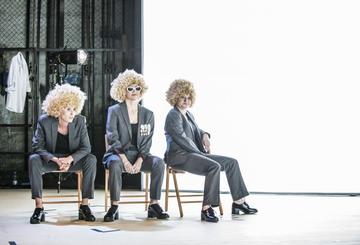 Genet’s three last plays, including “The Blacks,” were written in an exceptionally tense political climate. During the second half of the 1950s. Genet spent his days reading newspapers and discussing international politics, social oppression and the inevitable fall of the colonial system on every possible occasion. The play was directly inspired by the movie „Les Maîtres Fous” by Jean Rouch, a record of exorcisms practiced by an African sect on the outskirts of Accra, Ghana’s capital city, that ware a brutal parody of the colonizers. An 18th century colonial trinket - a music box decorated with a figure of a white, porcelain princess and her four black servants - became the second inspiration for the play. Can we imagine today a replica of the toy depicting a reversed situation? - asks the author of “the Screens.”

The political Genet is, however, the forgotten Genet. He functions as an absurdist in theatre, mainly due to his metatheatrical games, ceremonies and baroque phrases. He is less known for his political involvement: his support for the Black Panthers and Angela Davis, who became a symbol of the fight of African American women and men for justice and equal rights. In the context of his empathy for the issues of social and cultural dominance, Genet’s “The Blacks” appear to be more than just theatrical buffoonery: the play does revolve around a parody of a court trial in which the Blacks are supposed to prove their guilt before a tribunal of Whites. And, what must be stated, Whites who are also played by Blacks. Reclaiming the political significance of this gesture is one of the themes of the play.

The second theme is the attempt at answering the question which was provocatively raised by the author: But what does Black mean? And what colour is it, anyway? Following the suggestions of Genet himself (he also wanted men to play the roles of the title Maids), we plan to stage “The Blacks” with a female cast. As female physicality not only radically problematizes the juxtaposition of the private and the political, but also is a space for continuous, performative game with image. The postulates raised by bell hooks, the author of “Feminist Theory: From Margin to Center,” seem particularly interesting in the context of the fight for women’s rights, as she points to a paradox at the very base of the feminist movement. The inherently pro-emancipation and anti-oppression feminist movement can be easily transformed into an elite “lifestyle” which excludes the problems of class and race: a “fashion” for the white, rich and liberal women.