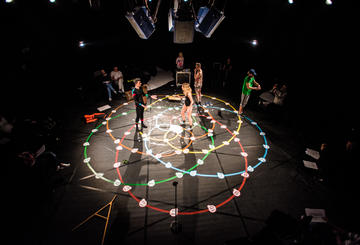 Take It or Make It

The score, like in music, restricts them and at the same time builds their common ground.

In the group situations every actor and every solo is considered equal.

One would expect that these situations would be harmonious,

following the principle that one's freedom ends where someone else's freedom begins.

But we know that it doesn't function. What we still don't know is whether it is a dream or a nightmare. Where are passions, visions, and beliefs in that “live and let live“ liberalism?

Where is the “common world“?

Based on these premises, Take It or Make It is (social) choreography whose main problem is how to configure a group situation democratically. However, once we decide not to simply take already existing – and manifestly inefficient – democratic models, the question of how democracy come into focus. Can we make the democracy our organizational principle?
Are we capable of making – instead of taking (or leaving) – it?

The performance was developed on the basis of the film score "Schenec-Tedy" by Heinz Emigholz.


The main concern of this work is how to configure a group situation democratically.

In wider sense, I am concerned with possibilities of democracy, including the discontent with representative democracy, which step by step excludes the voices of living people in making political decisions about the society these people live in. Especially irritating to me is the process of transition from socialism to capitalism in former Eastern Europe and Yugoslavia, where fulfillment of democratic procedures which are required to join the family of democratic European Union countries has been seen a proof of successful transition. What I see in reality though is that – along declaratively instilling democracy – corruption, criminal privatization of the public property, oligarchies, nationalism and homophobia are growing. It raises the question of how democracy. Is the EU model of the democracy we took the only one possible? Do we, people have will, skills and power to render democracy our organizational principle?

So for several years I have been inspired to think further the diagnose that Roberto Esposito made about the moment we now live in as “a situation that joins in a unique epochal knot the failure of all communisms with the misery of new individualism“. Trying to attend to that knot, Take It or Make It examines group situations with artists, who will make an attempt to overcome traps of democracy while contesting the ‘rationality’ of European neoliberal society. Thus Take It or Make It is (social) choreography for five performers based on a shared score, which oscillates between the freedom of individual interpretations and the questions of collaboration and antagonism in collective structures.

Ana Vujanović is a performing arts and culture theorist and practitioner. She firstly worked in Belgrade, where she co-initiated TkH [Walking Theory], a theoretical-artistic platform and performance journal. Now she lives in Berlin and Hamburg, where she writes, lectures and engages in performance making. Her research concerns are the intersections between performance and politics in neoliberal society.

The performance uses songs: Eye Of The Tiger by Survivor, Rich Bitch by Die Antwoord and aria Mentre Dormi Amor Fomenti from the opera L'Olimpiade and Achille In Sciro by Antonio Caldara performed by Philippe Jaroussky.

Nothing seems more appropriate today than thinking community; nothing more necessary, demanded, and heralded by a situation that joins in a unique epochal knot the failure of all communisms with the misery of new individualisms.
Take It or Make It
Gallery
Take It or Make It in Chile
Article 29.03.2016
Today, we are all democrats
Gallery
Inspiration
Video
Ana Vujanović o TAKE IT OR MAKE IT
Gallery
Press reviews
Article 22.04.2016
Dwutygodnik
Let's vote for voting method
Video
Take It or Make It trailer

Take It or Make It