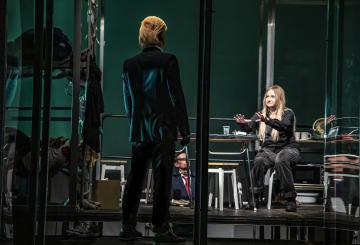 Something starts. The end begins. Can the end begin? Or perhaps it's the beginning.

Imagine a new world, a completely new world. There are no wars, no hunger, no injustice, no climate change, no authoritarian rule, no extreme social inequalities.

There is no water either - there is cola, there is no justice - although court buildings are still standing, there are no human rights, because there is no man anymore.

A few years ago, the scientist Dr. Monica Gagliano and her team debunked all previous ideas about plants. When studying the properties of maize, she noted that they can not only see, hear and talk to each other, but also process and remember information. The newly discovered, but probably always possessed abilities of plants are connected with a mechanism that allows people to survive - a defensive mechanism.

Paweł Łysak and Artur Pałyga return to the Bydgoszcz scene after five years to present their own version of the beginning of the end of the world. In the vision of the creators, Trump, not interested in ecology on a daily basis, conducts an investigation into plants which, in a great conspiracy against humanity, accelerate the process of climate warming. If they absorb less and produce more, their greatest pest – the man – will die.

And Trump is wrong. It is not a conspiracy, but a defensive mechanism.

Something starts. The end begins. Can the end begin? Or perhaps it's the beginning.