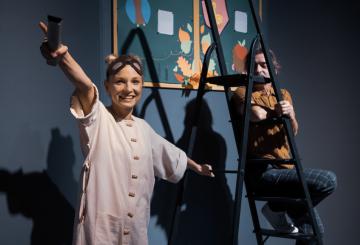 20 May 1932, after 14 hours and 56 minutes of flight, Amelia Earhart lands on a field near Londonderry, in Northern Ireland.

Thus, she becomes the first woman who flew over the Atlantic alone.

Soon afterwards, she will take up a flight around the world. On the same day, only sixty-seven years later, Amelka, heroine of the drama by a Canadian writer Marie-Huot, comes into the world. The little girl, passionate about aviation thanks to her father, explores the secrets of airplane mechanics, the properties of aerial movement, finally learns the stories of heroes rising into the sky. Her childhood, full of adventures, ends one day, unfortunately. A message about her father’s tragic death closes Amelia’s mouth. It might seem that forever. Certainly, no one would have thought that the wall she had built around her could be destroyed one lost butterfly.

“Butterflies”, directed by Emilia Piech, is a story about how important arousing passion is in a child’s life. Fulfilling dreams that germinate in heads curious of the world may be the most appropriate way to achieve happiness. The performance also talks about the power of determination, through which one can get anything one wants and fight against everything that becomes an obstacle in making one’s dreams come true. The performance is a part of the Bydgoszcz Industrial Heritage Year and it was produced thanks to the support of the City of Bydgoszcz and the Bydgoszcz  Aero Club. The performance is dedicated to the youngest audience and was created in reference to the rich history of military aviation in Bydgoszcz, which had its beginning in the second decade of the 20th century.

*Strobe lights are used during the performance.

20 May 1932, after 14 hours and 56 minutes of flight, Amelia Earhart lands on a field near Londonderry, in Northern Ireland.