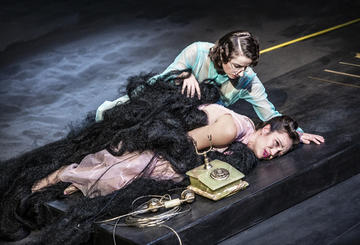 Three women and him. Absent Jureczek. A simple story – Monika, a doctor, wants a home and a child. Anna, an architect, focuses on work and dreams of being left in peace. And there is Antosia. Antosia certainly does not want a child. Although she is expecting it.

Today, abortion is often and loudly spoken about – by feminist, medical, legal, university, spiritual and, of course, political groups. Although the subject has been exploited for decades, in recent times speaking about abortion seems to be more and more decisive – there is an almost new chapter of the Enlightenment, in which everyone knows how it should be. “Monika’s Case” is a project that captures the voice of personal history.

The drama by Morozowicz-Szczepkowska began the trend of presenting a woman's view on theatre stage. The text, created in 1933 with a strongly emancipatory overtone, is considered one of the first feminist texts in the country. By restoring the voice of the author who has been