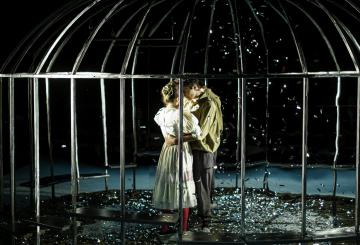 Theatre has always dreamt of influencing reality, speaking out on public issues and keeping up with current social problems. Art in general is a suspicious tool, using subtexts and looking for freedom.

What about art that is only an attempt to give people a bit of beauty and joy? What about comedy that is just a comedy? What if the bird is just... a bird. No subtexts, no politics, no contemporary references - finally, something for fun. But for sure?

And what is this art about?

The inhabitants of a certain city find out that the next day a big golden bird will rise above their heads. It is said that some inspired student is preparing an unforgettable spectacle, to which the whole city is invited. The city authorities will obviously not miss this event - wanting to guard the well-known order. After all, there have never been and will never be such birds in this city! No such gatherings. No such students. It's best if we keep it as it was before.

Magda Drab directs a nearly 100-year-old text in which she seeks an answer to the question: can theatre make a difference? Can laughter and exposure to art make us better? Finally, considering the extraordinary timeliness of Jerzy Szaniawski's text, does reality itself change at all? Maybe the change requires a bird?