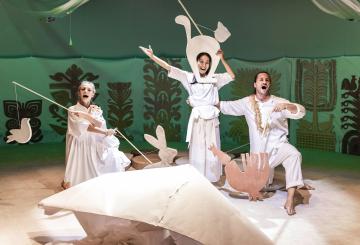 Cut-outs. Letter from the sea

8570 km is less than half the length of the Chinese Wall. To walk this far you need some free time, about ninety days.

It is also the total distance between Poland and Japan. Does that seem far away? Not at all. We are closer to each other than we think.

Cut-outs. Letter from the sea is a Polish-Japanese co-production intended for the youngest theatre-goers, presenting similarity of two completely different cultures. It is a story focused around a piece of paper, which for the Japanese is the basis for creating fabulous origami products, and for our ancestors was an inspiration for creating traditional folk cut-outs. In this story, however, paper is only a pretext for bringing the youngest audience closer to a special feature of human beings: the universal desire for community and being together.

The performance was produced on the occasion of the 100th anniversary of the establishment of diplomatic relations between Japan and Poland.